By 100clubAdminSeptember 5, 2018Uncategorized
No Comments

The Theodore Roosevelt Inaugural Site Foundation in Buffalo, NY, accepted numerous nominations for the Theodore Roosevelt Association Police Award.  This prestigious award honors a police officer who has overcome serious injury, illness or other disability and who has returned to work to perform exceptional service in fulfilling their duties in police work in Western New York.  Over the years, more than 150 officers from 13 communities have been honored with Theodore Roosevelt Association Police Awards.  The award is presented annually in Western New York, New York City, Long Island, Boston, Dallas, Nashville, New Orleans, Philadelphia, Los Angeles, and Washington, D.C.

The recipient receives $1,000, a medal designed by Marc Mellon and a photograph of President Roosevelt when he was New York City Police Commissioner.  The presentation takes place at the TR Site’s annual dinner in September 2018. 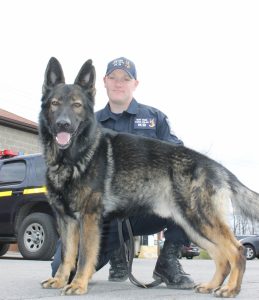 Trooper Sean Pierce has served in the New York State Police since November of 1998. In June of 2006, Trooper Pierce suffered multiple abrasions and bruises as he was dragged, and eventually dislodged, from an all-terrain vehicle while attempting to arrest the operator. He feared for his life as he was bruised and battered due to the operator of the vehicle refusing to stop. Trooper Pierce had no other choice than to use deadly physical force in an attempt to save his own life. Unfortunately, the operator died from his injuries, but Trooper Pierce survived the incident. After recovering from his injuries, he returned to duty in July of 2006, continuing to perform at an exemplary level. He is now the member-in-charge of the SP Holland Satellite Office and has been a K-9 handler since 2011.

Throughout Trooper Pierce’s career he has received numerous letters of appreciation and commendation for his praiseworthy contributions to several high profile and significant investigations, incidents and events; to include:

View his Letter of Nomination

He is a graduate of East Aurora High School and studied criminal justice at SUNY The College at Brockport before joining the State Police.  Trooper Pierce lives in East Aurora with his wife and three children, ages 7, 9, and 11.

The dinner will be held on Thursday, September 27 at Rich’s Atrium beginning at 6 pm.  Anyone interested in purchasing tickets to the event (Theodore Roosevelt Inaugural Site Anniversary & Awards Dinner) should contact the Site at 716-884-0095.