A Thank You From Major Clyde Doty

By 100clubAdminApril 6, 2020Hero Awards
No Comments

7 November 2019 – Niagara patrols from Niagara Falls Fire and the New York State Park Police responded to a report of a person in the Niagara River Rapids near the brink of the American Falls.  The individual was located near Luna Island alive in the river clinging to a branch. Niagara patrols rescue operations began immediately.

A first attempt was made at approximately 12:45 by Niagara Falls Fire, but was unsuccessful due to the strength of the Niagara River current.  At 1308, a second attempt was made by Niagara Falls Fire from a different location.  During this attempt, Major Doty approached Captain Christopher Rola and suggested someone from the rescue squad be stationed on Bird Island in the event the individual breaks free and is swept downstream towards the Falls.

Doty and Rola each grabbed an ice water suits and two rope bags from the Niagara Zone rescue truck and made their way to Bird Island.  By this time, a large crowd had gathered and was watching nervously when the individual purposely slipped out of the rescue harness and was swept toward the brink of the Falls.

Seeing this, Doty yelled to Rola for the rope and carabineer and entered the water.  As Doty entered, he was knocked over from the current and drifted down river towards the Falls. Rola while holding the rope, hurried to secured his end to a tree.  Major Doty was able to regain his footing and worked his way up the river against the current toward the victim.  At 1330 hours, as the victim was being swept down river, Doty was able to catch and secured the victim until Niagara Falls Fire arrived to assist.

At 1356 hours the victim and Major Doty were brought to shore by Niagara Falls Fire and Captain Rola.  The victim was carried in a stokes basket to a waiting ambulance. The victim survived and is alive today.

We encourage you to become a member of the 100 Club of Buffalo.  We provide service to the members of local law enforcement, fire and emergency medical service agencies and their families through dues and voluntary service.  To see our membership levels and to learn more about the 100 Club of Buffalo click the link below https://100clubbuffalo.org/memberships/ 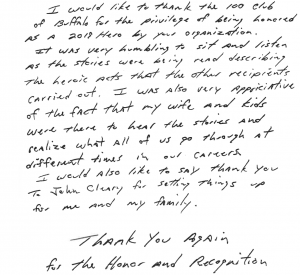