E.M. Cotter Fire Boat & Her Service to the City

In 1900, Buffalo’s fireboat, the Edward M. Cotter started her career and 100 plus years of service to the City of Buffalo and the fire department.  Built in New Jersey in March of 1900, the EM Cotter was commissioned in September by Virginia Pearson, the young daughter of one of the city’s fire commissioners.  The EM Cotter was originally named the William S. Grattan after the first paid fire commissioner for the City of Buffalo.  On November 5, 1900 the William S. Grattan Fire Boat was officially in service weighing 274 gross tons, with 2 coal boilers and able to pump 9,000 gallons per minute (GPM). 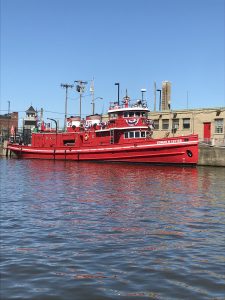 At this time, Buffalo was booming and the waterfront was a center of commerce.  Grain elevators, warehouses and shipping traffic overtaxed the two existing fire boats, John T. Hutchinson (Engine 23) and George R. Potter (Engine 29).  The city had shoreline hookups to allow the fireboats to serve as floating pumping stations supplying high water pressure to a fire hydrant system that covered the whole downtown area.  City officials decided that a third boat was needed to help break the ice that would accumulate in Lake Erie during the treacherous winters along with their normal firefighting duties.  When the William S. Grattan made her journey to Buffalo after completion, she traveled through Canada and met up with her two sister fireboats in Lake Erie, where they escorted her in.

On July 28, 1928, the William S. Gratton responded to James F. Cahill, an oil barge loaded with 5,000 barrels of crude oil that was aflame.  The barge burned for 17 hours, and when her mooring lines gave away, she started to drift.  William S. Gratton’s crew attempted to attach tow lines to the drifting barge but it struck a dock at a nearby oil company where the empty oil tanker B.B. McColl was docked.  The fumes on the B.B. McColl ignited an explosion on the William S. Grattan and a fire engulfed the boat.  Captain Thomas Hylant and his crew abandoned ship and swam through the flames to shore.  Sadly, Chief Engineer Thomas Lynch lost his life and seven other crew members were injured.  The boilers on the William S. Gratton ran dry and exploded which left the ship heavily damaged.

The William S. Gratton sat boarded up for 18 months while Buffalo City and Fire Department officials decided whether or not to replace her for $225,000 or rebuild for $99,000 which was $8,000 more than her original cost.  The final decision was to rebuild and in 1930 she was rebuilt at the Buffalo Dry Dock Company.  During the rebuild some improvements were made.  The boilers were converted from burning coal to burning oil and the engines were rebuilt.  The firefighting system was updated and could now handle foam fire retardant and the pilot house was raised to the upper boat deck level and a fixed turret tower with fire monitor was constructed on the ship’s stern.  A fourth fire monitor was added to the top of the pilot house of the ship as well.  The William S. Gratton took place in an acceptance ceremony and participated in a race against the harbor tug Kentucky, which was considered to be one of the fastest tug boats on the Great Lakes!

In the early 1950s, the William S. Gratton was starting to wear and tear and show signs of age.  The boilers were only able to operate at 40% capacity and an engine room steam leak in 1951 injured part of the crew.  The William S. Gratton was sent to the Sturgeon Bay Shipbuilding & Dry Dock Company of Sturgeon Bay, Wisconsin for a refit in November of 1952.  During the refit the boilers and steam engines were replaced by diesel engines, the pumps for the firefighting systems were replaced, the single propeller was replaced with twin propellers, the fixed firefighting platform was replaced with a hydraulically operated platform and the twin funnels were replaced with lower dummy funnels.  When she returned in 1954 she was renamed Firefighter and in 1955 she was renamed again in honor of Edward M. Cotter, a Buffalo firefighter and leader of the local firefighters union who had recently died.  After the refit, the Edward M. Cotter mounted five fire monitors capable of pumping 15,000 US gallons of water per minute.

E.M Cotter Fire Boat Called Into Service Many Times Over the Years

On October 7, 1960 the Edward M. Cotter came to the aid of firefighting authorities in Port Colborne, Ontario, Canada.  Two days previous, on October 5, 1060 a set of grain elevators caught on fire at the eight story Maple Leaf Milling Company.  The Port Colborne Fire Department did not have its own fireboat and they were unable to contain the fire in the building.  The Buffalo Fire Department was asked to send the Edward M. Cotter to lend assistance escorted by a US Coast Guard cutter since they did not have navigational equipment and never crossed international borders before.  The trip to Port Colborne took two hours with an additional four hours needed to bring the fire under control.  This was said to be the first time that a United State fireboat had crossed international borders to help authorities in another country. 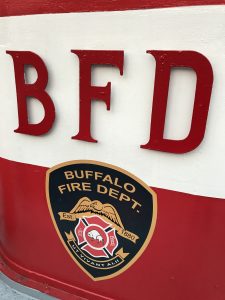 A multiple alarm fire broke out at the famous West Side Rowing Club, the largest and oldest rowing club in the US on October 5, 1960.  As Captain John Terech approached the fire from the south with 35 mph winds behind him, he thought the building would be a total loss with the varnished rowing shells inside helping fuel the fire.  The flames shot up over 70 feet into the air!  The pumpers were fighting a losing battle and the Cotter came to the rescue with all five turrets operating.  In a few minutes time there was nothing left but the ruins.  The only things left standing were a truck, trailer and $14,000 in cash.

In 1978 the USS Little Rock, a retired United States Naval guided missile cruiser on display at the Buffalo and Erie County Naval & Military park, began taking on water and listing.  The Edward M. Cotter and several Buffalo Fire Department fire engines pumped water out of the Little Rock for five days keeping the ship afloat and level while repairs were being made.  The

Edward M. Cotter assisted the disabled US Coast Guard cutter, Ojibwa, during the winter of 1977.  Ojibwa was on Lake Erie and lost her steering due to the rudder breaking off and sinking to the bottom of the lake.  She began to take on water, around 5oo gallons per minute and the pump could only take out 250 gallons of water per minute.  The Edward M. Cotter towed Ojibwa to her base in Buffalo while keeping her afloat during the repairs.  On July 31, 1984, the Edward M. Cotter towed the Polish tall ship Zawisza Czarny off of a sand bar while the ship was visiting Buffalo.

In August 2000, the Edward M. Cotter celebrated her 100th Anniversary.  There were all kinds of festivities including having many members of the former crew, and members of the Cotter family from the US and Ireland.  The Cotter is currently the oldest operating fireboat in the country.

In addition to firefighting capabilities, another one of the Edward M. Cotter’s critical roles is to serve as the City of Buffalo’s sole ice-breaking resource and emergency if necessary.  When the Edward M. Cotter breaks up ice jams in the Buffalo River, allowing the water in the upstream tributaries to flow freely to help prevent flooding.

A non-profit group named “Friends of the Cotter,” founded in 2005, has been running fund-raising events to overhaul Edward M. Cotter.  Along with her normal duties, Edward M. Cotter has been sent to various festivals and boat shows around the Great Lakes.

On January 29, 2016, the Fireboat E.M. Cotter Conservancy, Inc. was formed.  The Conservancy is a collaboration of the Fire Bell Club of Buffalo, the Buffalo Fire Historical Museum, Firefighters Local 282 Union and the WNY Retired Firefighters.  Their mission is to promote and support the Buffalo Fire Department Fireboat, The Edward M. Cotter, which is in need of some costly repairs (new propellers, shafts, engine overhaul and hull repairs.  The Conservancy hopes to fund $25,000 per year to maintain above the waterline upkeep for the Edward M. Cotter. 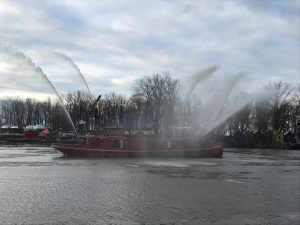